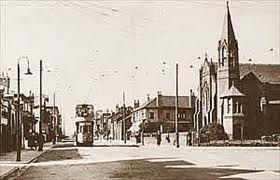 Evening services at the rear of the “Black Bull” pub in 1860 are the earliest known activities, which led to the need for a new Mission Hall, which was opened opposite the present church site in 1877.

Liverpool Presbytery accepted the Mission as a preaching station, which Revd Matthew Mair was called to serve. He built up the fellowship and negotiated the purchase of the church site and organised the building work. The foundation stone was laid in 1899 and the church opened in 1900. The rear halls had been built and the organ installed by 1907. A Manse was purchased nearby in 1928 but this was sold in 1986.

The congregation grew as a Presbyterian Church of England until it joined forces with other denominations and became part of the United Reformed Church in 1972.

Substantial alterations and upgrading works were carried out in 2000/01 to the front of the building to encourage greater use of the premises by the local community. And today, we are still being guided by the Holy Spirit into new expressions of church,which are relevant in the 21st century to the local community. 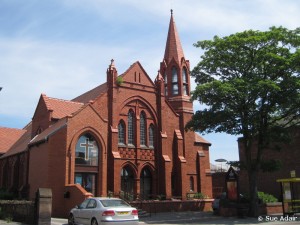 The Church building is set on the North Coast of the Wirral Peninsula in a suburban residential community, which still retains something of a “village” feel. The premises are on the main road through the ‘village’ close to M53 Junction l. There is a bus stop immediately outside, serving Liscard, Seacombe and Birkenhead, and a train station on the Merseyrail network within quarter of a mile. Neighbouring properties are mainly shops with flats over, and there is some sheltered accommodation.  There are two schools within quarter of a mile (one Catholic Secondary College and one LEA Primary school), two pubs (opposite and adjacent), post office, eating places and takeaways etc.

The population of the area which we feel we serve is approximately 8000 (within about l mile of the church in any direction) and 80% of our membership lives within that area.

As a geographical area, ‘Wallasey’ describes several villages, which over time have grown so that they are now one continuous conurbation still with individual place names;  we have good working relationships with other URCs in Wallasey, and with a number of our ecumenical partners in Wallasey Village, with whom we have formed Village Churches Together, which is based on a covenant pledging members to work together as and when possible. 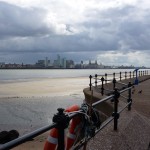 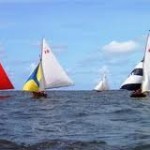